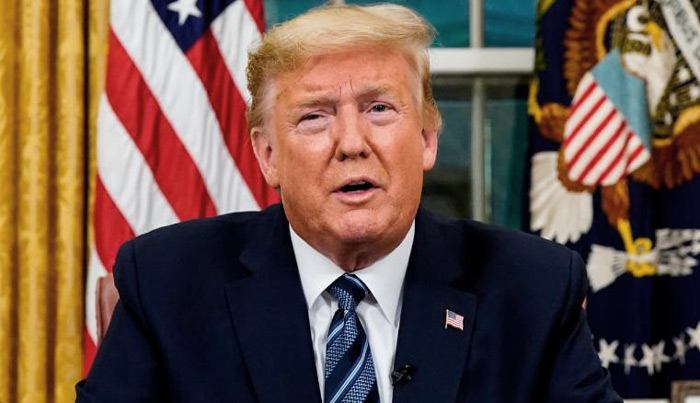 Washington, April 20, 2020:  President Trump announced in the late evening in a tweet post that he will suspend immigrants from coming to the United States. President Trump says his executive order barring new immigration will apply only to people seeking green cards, will last 60 days and won’t affect workers entering the country on a temporary basis.

He said he would review the executive order at the end of that period and decide if it should be renewed. He did not say when he would sign it. The order is effective at 11:59 p.m. eastern daylight time on April 23, 2020.

President Trump emphasized the economic effects of the order, indicating it would “protect American workers” as his “buy American hire American” campaign has made clear since he took office.

Trump’s executive order only addresses green cards because the work visa portion is more complicated and needs more time to sort out, especially given the fact that many of those currently in the US on work visas are working to face the pandemic, from workers at food processing plants to health care workers.

Scope of Suspension and Limitation on Entry:

(a)  The suspension and limitation on entry pursuant to section 1 of this proclamation shall apply only to aliens who:

(i)    are outside the United States on the effective date of this proclamation;

(ii)   do not have an immigrant visa that is valid on the effective date of this proclamation; and

(iii)  do not have an official travel document other than a visa (such as a transportation letter, an appropriate boarding foil, or an advance parole document) that is valid on the effective date of this proclamation or issued on any date thereafter that permits him or her to travel to the United States and seek entry or admission.

(b)  The suspension and limitation on entry pursuant to section 1 of this proclamation shall not apply to:

(i)     any lawful permanent resident of the United States;

(ii)    any alien seeking to enter the United States on an immigrant visa as a physician, nurse, or other healthcare professional; to perform medical research or other research intended to combat the spread of COVID-19; or to perform work essential to combating, recovering from, or otherwise alleviating the effects of the COVID-19 outbreak, as determined by the Secretary of State, the Secretary of Homeland Security, or their respective designees;  and any spouse and unmarried children under 21 years old of any such alien who are accompanying or following to join the alien;

(iii)   any alien applying for a visa to enter the United States pursuant to the EB-5 Immigrant Investor Program;

(iv)    any alien who is the spouse of a United States citizen;

(v)     any alien who is under 21 years old and is the child of a United States citizen, or who is a prospective adoptee seeking to enter the United States pursuant to the IR-4 or IH-4 visa classifications;

(vi)    any alien whose entry would further important United States law enforcement objectives, as determined by the Secretary of State, the Secretary of Homeland Security, or their respective designees, based on a recommendation of the Attorney General or his designee;

(viii)  any alien seeking to enter the United States pursuant to a Special Immigrant Visa in the SI or SQ classification, subject to such conditions as the Secretary of State may impose, and any spouse and children of any such individual; or

The 60-day order includes an option to extend if needed.

Article Two of the United States Constitution gives the President broad executive and enforcement authority to use their discretion to determine how to enforce the law or to otherwise manage the resources and staff of the executive branch. The ability to make such orders is also based on express or implied Acts of Congress that delegate to the President some degree of discretionary power. Congress can revoke, modify, or supersede an executive order if the President was acting under authority granted by Congress: But if Congress makes changes that the President disagrees with, it can expect to face a Presidential veto, which it could only override with a two-thirds vote in both the House and the Senate. Even if Congress doesn’t directly block an order, it can often stop it from being implemented. Congress controls the power of appropriating funds, and many other things that can affect implementation.

Courts can declare an executive order illegal or unconstitutional if a lawsuit is filed.

What can we expect in the near future? Should immigrants be worried of this possible change? Immigration practitioners should monitor the ongoing process. Many non profits, pro immigrant organizations, and Universities could file a class action suit against the government. As of right now, the order will only affect some categories and will only temporarily suspend the entry of certain immigrants.